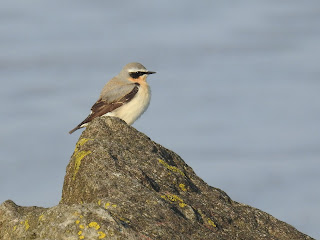 Despite the continuing cold weather; migrant birds such as this Wheatear have been passing through. This bird was one of a flock of 6 that stayed a few hours this weekend. It looked like the local swallows had arrived en-masse when 4 one day became 24 the next all on wires along Strode Road, then just as suddenly most of them vanished. Bar-tailed Godwit numbers have decreased but there are still Whimbrel moving through and these use all of the Dowlais fields, not just the scrape showing how important it is to keep as much habitat as possible for them and Curlews as both species are in serious decline. This video was taken from a gate in Strode Road itself when the birds happened to be much closer than normal Today a rarer wader graced the scrape. This was a Little Stint. It is really small as the name suggests and this could be seen when it fed next to a Dunlin and a Ringed Plover at one point. Both of those are small waders themselves. This was an excellent find by Steve from Yatton,
Post a comment
Read more 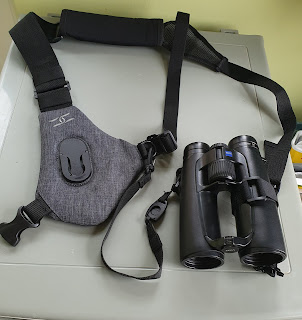 Several years ago I got fed up with having a sore neck from carrying binoculars. so I swapped to using a harness, first with my Opticrons and latterly with my Zeiss when I bought these for a major birthday. Recently though, my Zeiss harness has stretched so that the bins knock against my legs...if I am lucky. I tried using Ikea food bag clips to hold the straps tight which worked to some extent. It was suggested to me though, and rather forcefully I felt,  that the look was, perhaps sub-optimal. I decided therefore to get a new harness.  Initially I put out a request on birdforum and had a couple of types suggested, but I also did my own on-line research. It became apparent that there is not that much information available. The harness that looked the best, in my opinion was no longer available from any supplier which left just 3 or 4 rather similar ones and this one The Skout Binocular Harness. I had been pointed towards the Cotton Carrier website by my friend Jason  who uses their ca
Post a comment
Read more

A rare and spectacular migration occurs 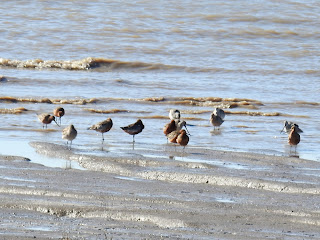 Once every 10 or so years the weather is just right for a rare event to occur along the Severn estuary including Clevedon. This is one of those times. The event is the migration of spectacular arctic waders in their breeding plumage, with a stop off at the Dowlais shoreline In the past week up to 200 Bar-tailed Godwits have put down to feed on our rich mud and are now being pushed close enough inshore to be seen from the seawall path between Clevedon and the Kenn Estuary. In winter these birds are grey and white but in spring they begin to turn to a wonderful brick red and some of our visitors have begun this change. Mixed in with the Godwits are a few Grey Plovers which are also moulting to have a dramatic black front. Two can be seen in this picture; taken this morning The flocks form swirling patterns as they move along the shore with individual birds much bigger than the Dunlin we see here all winter. More regular, at this time of year, are the flocks of Whimbrel, a small species
Post a comment
Read more 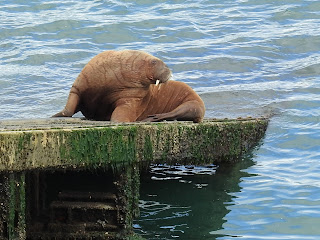 My car has been filling up with water and was booked for a 3 day investigation starting on April 12th in North Bristol. By coincidence this was the day that Wales was due to open it's borders to visitors after several months of lockdown. It seemed best to use this coincidence wisely, so I collected my courtesy car, filled it with fuel and set off. It took a little while to get used to gears again and I was grateful that the 1000cc engine of my loaned, pedal car was not having to transport anyone else besides me. After a couple of hours I pulled into Swansea services, collected a coffee and messaged a friend to find out the latest news on Tenby's most famous visitor: Wally the Walrus. Having left my maps in my own car I now discovered that sat nav was not included in the deal. So I messaged a friend whom, I knew, would have arranged to be on site by dawn. He kindly sent postcodes for a car park and the path I would need to walk towards to get views. These and my mobile phone w
Post a comment
Read more

A stop start beginning to the new season 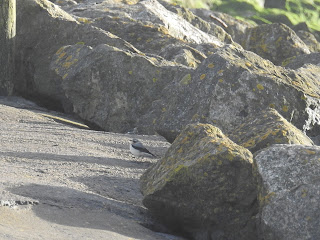 The first Wheatear of Spring is an important moment for me and usually comes around the 23rd. This year though it was early and involved a Westerly Gale and cold conditions so its no surprise that I did not see another one in the following week. The real highlight of the week, though was finally catching up with the Penduline Tits at Weston airfield. It was my forth time of trying that really paid off with just distant views or no views each time before that. This time though they flew into the reed mace nearest the footpath and stayed for at least an hour. They are one of the smartest birds to visit the UK and may yet become a breeding species. Currently, though these appear to be the only 3 in the country. Some fantastic pictures by "real photographers" show that they are actually eating micromoth larvae from inside the seedheads. I was pleased with the results I obtained but when I heard the Siberian Chiffchaff again, that I had found and identified from here on an earlie
Post a comment
Read more

Balanced on the cusp of spring 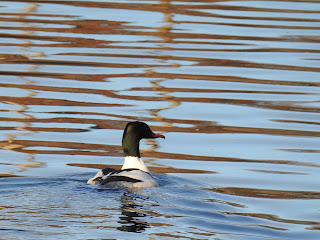 In fits and starts spring is trying to break through. Its limited yet and the storm forecast for tonight won't help. The first few Blackthorn flowers have not been joined by any others as yet and there is very little display of note among the Lapwings and Shelduck at Dowlais. Winter visitors such as Goosander are still around but ranging more widely from the Blind Yeo and sometimes in better light these mornings warm light if not warm air as yet A Blackcap has appeared by the Strode Road bridge and for once allowed a picture, though whether its a very early migrant, or more likely a local winter visitor is hard to say This bridge is also a good place to watch both Dunnocks  and occasionally, Grey Wagtails More and more often the sound of Skylarks singing greets me as I get to the corner of Strode Road and start down the track to the seawall but any videos I've tried so far are too full of wind noise. So here is another still pic One lunchtime I arrived at Blackstone Rocks, by
Post a comment
Read more

Hints of spring and an appeal for recognition for Dowlais 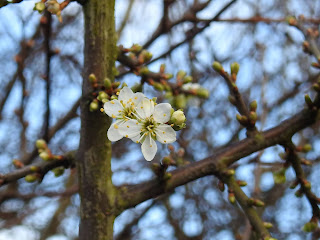 Though the weather has been mostly pretty gloomy this week, some definite signs of spring have arrived; for instance, this is the very first Blackthorn blossom of the year that I have seen. It was not there yesterday, so must have just opened this morning. Firstly though an appeal to any readers in North Somerset. Our council is holding a consultation about its new Green initiative strategy. Link here  http://www.n-somerset.gov.uk/my-services/libraries-leisure-open-spaces/parks-countryside/green-infrastructure-strategy For some reason it is not clear that Dowlais is included as an area to improve biodiversity or improve sustainable grassland. The questionnaire only has a few questions so I would ask that anyone with an interest in wildlife fills it in to show our passion for the area and our commitment to leaving a better environment for the next generations. It took me about 10 mins to complete and use the "what more can we do box" to put in a plea for more wader habitat at
2 comments
Read more
More posts